Mood Board stand debuts at BGNF Show in Solihull
Posted on May 29, 2015 by chris 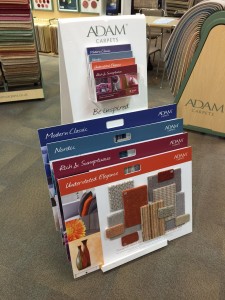 Adam Carpets Mood Board POS made its long awaited debut at the Buying Group National Floor Show in Solihull.

The stand has been eagerly anticipated since the prototype was first shown at the Flooring Show in Harrogate last September.

The wait was worth it though as it proved an undoubted success.

Eamonn Prescott, Sales and Marketing Director, explained “We initially made twenty stands to test the water. Although interest was high at Harrogate, the cost of the unit isn’t cheap as we made sure we made it using the best materials we could. We wanted it to be an upmarket unit. I think we underestimated it a bit though, as the twenty stands sold out on the first day. A second order has already been placed.”

The stands were particularly popular with stores that feature fabrics and interior design such as Sterling Furniture in Scotland and Arthur Llewellyn Jenkins in South Wales. 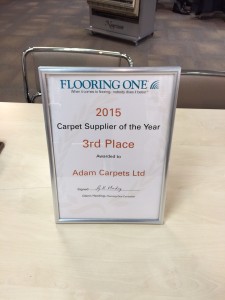 Adam Carpets were awarded 3rd place in the ‘Carpet Supplier of the Year’ category at the recent Buying Group National Floor Show held in Solihull.

The award was presented by Glenn Harding of the Flooring One buying group whose members vote over a number of categories such as quality, customer service and value for money.

It is the second year in a row that Adam Carpets have received the award for third place.

Eamonn Prescott, Sales and Marketing Director at Adam Carpets, said this “I am thrilled that the hard work of all the staff at Adam Carpets has been recognised by our customers. From the diligent workers in the factory, to the excellent sales office team and accounts department, they have all played a major role in securing third place in a competition of fifty or more suppliers.”