An Interview with Eamonn Prescott and Kelly Butler

Over recent newsletters we have recounted how the range came about, how it was launched and how the colour bank escalated over a short period of time. In this issue we focus on the latest colours to be introduced to the range and how the marketing campaign ‘Hugo & Ella’ was invented by Sales Director, Eamonn Prescott and Design Manager, Kelly Butler.

Q: What sort of research went into the ten new colours introduced in February 2015?

KB: “From the start of the research to the launch took around 18 months. We visited numerous shows including Domotex, Decorex, London Design Week, to name but a few. We also looked at forecasts for upcoming trends. Initially we probably chose around 60 to 70 colours, so almost another full set of Fine Worcester!”

Q: How did you finally decide on the 10 colours and when did ‘Hugo & Ella’ become the theme?

KB: “There was a team of three, myself, Eamonn and Chris Adam, who through a series of meetings whittled the colours down to around 25 that we really liked. The colours were then taken to the Harrogate show, where we took opinions from some of our retailers. It was around October 2014, that we decided on the ten colours.”

EP: “Once we had the 10 colours, it was very clear that there was a natural split, with five being masculine and five feminine. It was at that point that Kelly and I started talking about the possibility of also a dual launch. We thought the colours should be presented separately.”

Q: Where did the names ‘Hugo & Ella’ come from?

EP: “Once we had decided on the masculine/feminine themes, we realised that we would have to find better names for the presentation. So, I started work on names that would suit. We wanted not to common names, but ones that would also work together and not seem too odd ball. I remember a really long list that included ‘Pippa & Theo’, ‘Flo & Bertie’ and ‘Tilly & Alfie’. In the end ‘Hugo & Ella’ just worked.

Q: What was the reaction of the retailers?

EP: “I had to get it past the Reps first! It wasn’t too bad. We had done A4 handouts and given the characters back stories as well. We had a presentation board and highlighted the colours through social media, as well as print media. Some retailers struggled with the concept, but most were happy to see something different.”

Q: The colours have been very successful. What was your reaction when Pantone announced their colours of the year, which were pretty much ‘Hugo & Ella’?

KB: “I’m really pleased that the colours have done so well. Putting two Blues and two Pinks into a market dominated by Grey is also a little risky, but we were really confident that Blue was going to be a big colour and so it has proved.”

EP: “When the news broke about the Pantone colours, I did have a little smile on my face. Fine Worcester has always been about the quality and especially the colours. Retailers rely on manufacturers to get the colours right and I think with Fine Worcester and Adam Carpets they can always be sure of that.”

Our thanks to Eamonn and Kelly for their time. It has been an amazing few months interviewing the people, past and present, that have worked so hard to keep this fantastic range at the forefront of wool twist carpets. My thanks to all involved and we look forward to the next 25 years. 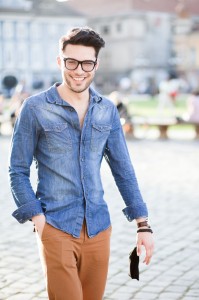 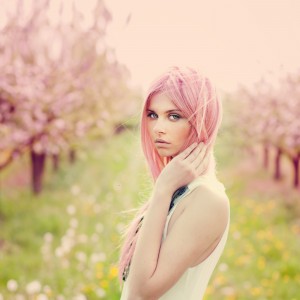 We have been asked a lot lately about moth proofing and moth resistance and whether our carpets have been treated. This is particularly significant for retailers in the South who are coming up against an above average summer for moth infestations.

All of our plain coloured carpets will be treated against moths and other insects. This includes pattern ranges such as Inspirations and Boulevard. Any carpet that has a heather or berber ground is not certain to have been treated. This is because all of our plain background carpets are dyed by us here in Kidderminster, so we know for certain that the treatment has been applied. Heather and berbers are bought in direct from the spinners already blended.

Ranges such as Fine Worcester, La Dolce Vita and Catherine that are completely plain coloured, have all colours treated.

Please note however, that this treatment is applied to deter the moth or insect from digesting the yarn. It is effective if the moth or insect ingests any part of the fibre, it will not prevent moth infestation or kill moths or insects which do not ingest the fibre.

Adam Carpets has continued its investment programme by adding another bespoke delivery vehicle to its fleet.

This new vehicle has been designed to Adam Carpets specifications and is capable of carrying 5m wide cuts and rolls. The new vehicle will cover deliveries to North Wales and The Wirral, West Midlands, parts of South Wales and into Leicestershire and Nottinghamshire on occasions. 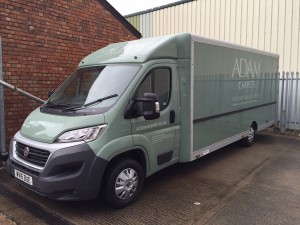 Adam Carpets were delighted to welcome staff from Hart Carpets of Hartley Wintney and E C Holywell, Owestry on our latest factory tour. The tour includes a full overview of all our production processes starting with scouring the yarn, dyeing in our on site dye house, colour matching, winding, beaming, tufting and backing line.

The feedback as usual from those on the tour was great.

If you think that you would be interested to come along and see what makes an Adam Carpet better than others, then please contact your local Area Representative. Tours will be available throughout the Autumn. 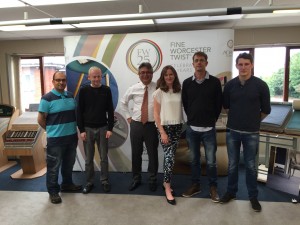 Our thanks to Chappell Carpets of Bradford for this wonderful window display that they have created. The use of Marquette Plaid on the stair unit is inspired and a great way to show what visual impact it makes.

If you would like us to supply you with ideas, materials or general information about our window displays then please contact your local Area Representative who will be happy to discuss any options with you. 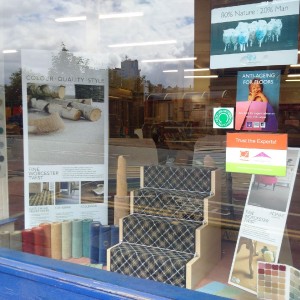 Our thanks to Norman T Craig Furnishers of Haddington, East Lothian, for these fantastic installation images of our Castlemead Twist CD20 Baltic Sea. The carpet has been whipped on both sides and held in place with some gorgeous stair rods from stairrods UK.

If you have any images that you would like shared on social media or in this newsletter, please send them to info@adamcarpets.com with ‘images for newsletter’ in the subject line. 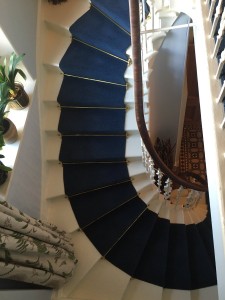 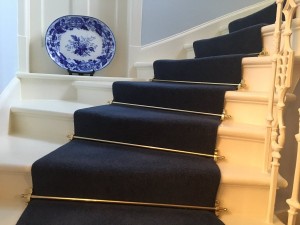