Retirements, Christmas and Celebrations
Posted on February 1, 2016 by chris

Although Christmas may seem a long time ago now, at Adam Carpets we said goodbye to two special people and special friends. David Ruck and Sara Webster retired at Christmas.

David was our representative for London, the South East and East of the country. He was with the company for 12 years and had been in the trade for 50! He is well respected by all of our retailers and he appreciated all the good wishes he received from them. As a conscientious member of Adam Carpets, David has even stayed on for a few days during January to ensure a smooth handover to our new representative, Mr Simon Nyss.

Sara Webster was our Technical Manager. She was with Adam Carpets for 16 years, previous to that being with Georgian Carpets amongst others. Sara’s vast knowledge was a great asset to the company and she will missed by us all, although she only lives 100 yards from the factory so we may see her a bit more yet!

We were lucky enough to get a few colleagues of theirs together for a Retirement/Christmas dinner before Christmas. Thank you both for your service and dedication. 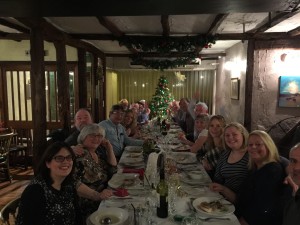 Sara is second from the left and David is waving on the right!

Window of the Month
Posted on February 1, 2016 by chris

This weeks window of the month is from Carpet Studio in Glasgow. They have used our mood boards to great effect placing them strategically in their front window to attract passing trade.

We were also delighted to hear feedback from Frasers of Ellon this week who called to say that a customer had chosen and ordered a carpet direct from their mood board! That’s brilliant feedback for us. 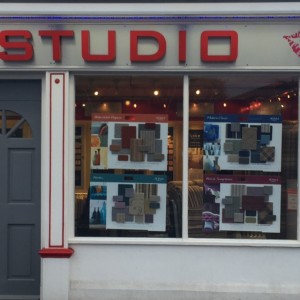 Avonvale Carpets with some Stunning Stripes!
Posted on February 1, 2016 by chris

A big thank you to Paul and Jim at Avonvale Carpets in Bath for tweeting and posting this beautiful installation of Castlemead Velvet Stripe – CVS14 High Seas (Blue again, just saying)

This is how Avonvale described the project on their Facebook page:

Castlemead Velvet Stripe on a stairs (with turned edges) and landing in Larkhall, Bath. We re-used the clients stairrods.

This is an interesting stripe as it’s symetrical which means it lines up easier all the way up.

Needless to say the client is delighted as are we. 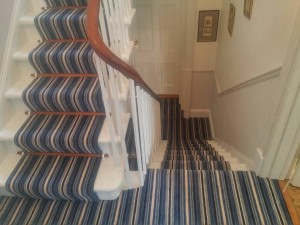 Behind The Scenes as Adam Re-carpets Itself!
Posted on February 1, 2016 by chris

We have been very busy over the Winter period in terms of refurbishing some parts of our offices. We have put new carpet tiles (our own Castlemead Tiles) into our showroom and our boardroom, as well as some Woodstock tiles into our reception and on our stairs. For those of you who have not been on a factory tour (ask Reps for details) here are a few behind the scenes images of Adam Carpets! 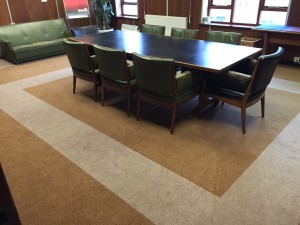 Inside the boardroom at Adam Carpets 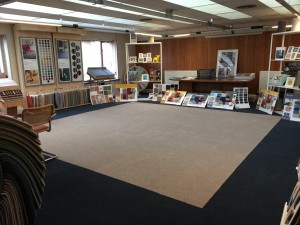 The showroom now adorned with border and inlay 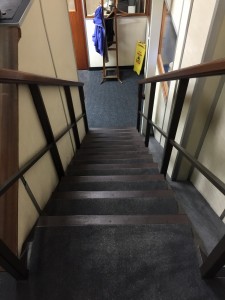 Main staircase from reception to boardroom and showroom

To those of you who follow us on social media you will know that we are quite active. There are not many days when we are not posting on Facebook, tweeting on Twitter or pinning on Pinterest!

A few weeks ago we had ‘Blue Week’ on Twitter and Facebook. You may have guessed by last months newsletter that we think Blue is going to be big this year. It was great therefore the response we had from retailers including the installation below which was tweeted to us by Carpet Studio of Glasgow with the title ‘Blue Wednesday!’. 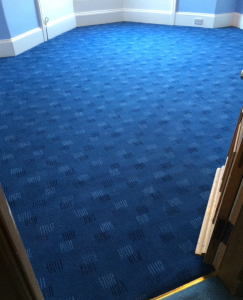 Our Marquette Plaid range is proving very popular at Swadlincote based furnishings retailer, Toons. They selected our colour MP15 Rowan Maize to be the chosen floorcovering in one of their most popular room sets at their recently refurbished store. As you can see from the images the overall effect is stunning and has been reflected in increased interest in the range with Toons. 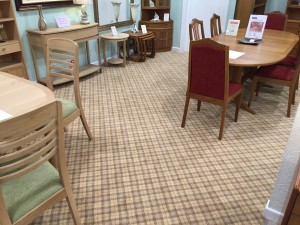 Adam Carpets Helping The Homeless
Posted on February 1, 2016 by chris

It is always nice to be able to help charitable causes as and when we can. We were contacted by SmartMove, a charity based in Halifax, to see if we had any obsolete or excess carpet that they could use in their work to help supply houses to homeless people.

We had a look at what we had and what was available and offered some carpet to the charity. SmartMove came down and collected the carpet the very next day and fitted it on the following one. SmartMove is mainly run by volunteers and the work they do is fantastic.

It was great that they took the time to send a thank you note to us. 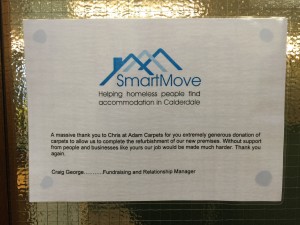 Adam Carpets Supporting our Retailers Affected by the Floods
Posted on February 1, 2016 by chris

A lot has happened since our last newsletter. Christmas has come and gone and the New Year was ushered in. The overwhelming memory for most of us though would be the catastrophic floods that occurred throughout the country, but especially in Cumbria and Yorkshire. Many communities were devastated not just once, but two or three times as the weather was relentless. 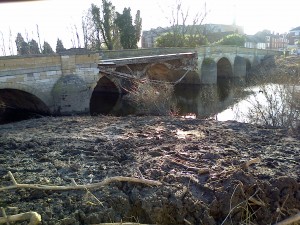 Tadcaster bridge cut in half by the floods

At Adam Carpets we always try to help our customers when we can, so when we received calls from Kendal Carpets, Capstick Carpets, Classic Carpets in Cumbria and Calcaria Carpets in Tadcaster, whose showrooms were all affected by the floods, we were able to send in replacement stands and samples straight away, so that they could get back to some normality.

To try to describe the scenes, Classic Carpets in Carlise, just along from the football ground, had a water line over 5ft high in its showroom. It was a similar story for Kendal and in Appleby where Capstick is based. You can see the image above of the bridge in Tadcaster, where Calcaria Carpets sit alongside.

To all our customers who have been affected by the floods, wherever you may be, our thoughts are with you and we wish you a prosperous and dare we say drier 2016. We are here to help and support in any way we can. 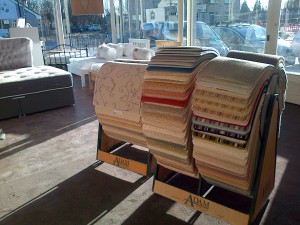