Adam Carpets have confirmed that they will be attending the Flooring Show in Harrogate next year. The event which is held in late September at the Conference Centre is the only flooring trade show open to all retailers. This year saw Adam Carpets return after an absence of fifteen years.

“We felt like it was the right time to go back this year and the reaction we had at the show meant that returning next year was highly likely. We have gone back and looked over the leads we turned up and the retailers we spoke to and decided that we would exhibit again in 2015″ said Eamonn Prescott, Sales Director.

Adam Carpets stand at this years show was one of the highlights of the Wool Trends Hub, which was created by the Campaign For Wool. The stand featured on influential Interior Design bloggers, Scarlet Opus, top ten highlights of the show. 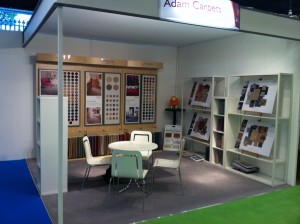