Our stand this year featured a new wall display which was commissioned to celebrate the 25 years anniversary. The display featured all the features and benefits that one associates with Fine Worcester Twist plus quotes from retailers about its quality and why they like it so much.

Also on the display was a brief timeline out lining the history of Fine Worcester and some of its more notable moments. The five points were:

May 1991 – Fine Worcester Twist is launched with 20 initial colours

June 2006 – Fine Worcester Twist FW52 is installed into the main parliament buildings in Stockholm on behalf of the Swedish government. At 2,994 sq/m it remains the largest single installation of Fine Worcester anywhere in the world.

February 2015 – Adam Carpets introduce the ‘Hugo & Ella’ collection for Fine Worcester Twist. This is the first time any new launch of colours has been done as a named collection. The response is amazing. The themes are ‘Blues & Pinks’ and are also named as Pantones ‘Colours of the Year for 2016′ some ten months later.

There are of course many, many more memorable milestones which we will touch on over the next couple of months. 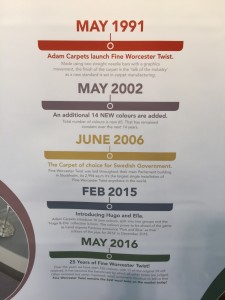