Last month saw Part 1 of our interview with former Sales Director, Jim Bennett and David Adam regarding the launch of Fine Worcester Twist 25 years ago. This month, Jim tells us how the name and colours were decided upon.

Q. With the construction decided upon, how did you go about deciding on the name ‘Fine Worcester Twist’ and the initial colour bank?

JB: “Hilary Terry (Designer) and I got to know the dyer at Walter Walker very well. We were doing lots of colour trials, at least four at a time. I’m not sure how many we did, but it was a lot!

We were lucky as Hilary and I both had the same appreciation of colour and we knew that we wanted colour to be a cornerstone of the range. Many of the initial colours came from the environment, fabrics and fashions. I believe that is still the case today. We were determined not to be swayed by other peoples ranges.

The name “Fine” came from two sources. One from the yarn as it was a ‘superfine’ yarn and the second because it resonated quality as in ‘Fine Bone China’. The “Worcester” element was simply taken from the city in our county. It is one of the finest in England, so it made sense to use it.

Q. The colour names have become almost as famous as Fine Worcester itself. How did they come about?

JB: The idea behind the names is a little less conventional I’m afraid. I got the idea from a Worcestershire directory I found in The Fruiterers Arms in the village of Ombersley where I lived at the time. I liked the idea of the village or town name followed by a colour starting with the same letter, for example Grafton Gold. We started with twenty colours, little did I know the legacy for naming that I left behind for Hilary!”

Q. With the range launched in May 1991, what sort of impact did Fine Worcester have?

JB: “Well it just took off. Both David and I were delighted that the retailers could see the quality of the carpet and that the public seemed to love it also. We had always planned to introduce new colours every season at Harrogate. By 1993 we had launched a further six colours and by 1998 we were up to forty. The colours increased with the demand for the product.

We also around this time realised that two-ply yarn was growing in popularity. Our other big range at the time was Castlemead Twist which was launched just after Fine Worcester. It was originally a singles range. We then changed it to a two-ply and our reputation for quality products was further enhanced.

I loved being involved with Fine Worcester Twist. In my opinion it is one of the finest, if not the finest, twist pile carpet on the market.”

Our thanks to Jim and Mr Adam for fascinating insight into the launch of Fine Worcester Twist.

Next month we will review the rapid increase in the number of colours to 65 and what colours shaped the turning of the millennium.

Thank you also to all the readers of this newsletter who have taken the time to either write or talk to us about this feature and especially Part 1 of the interview with Jim. We are influenced every day here by Fine Worcester and to receive such appreciation and interest shows how much it means to our customers as well. 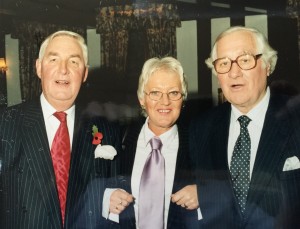